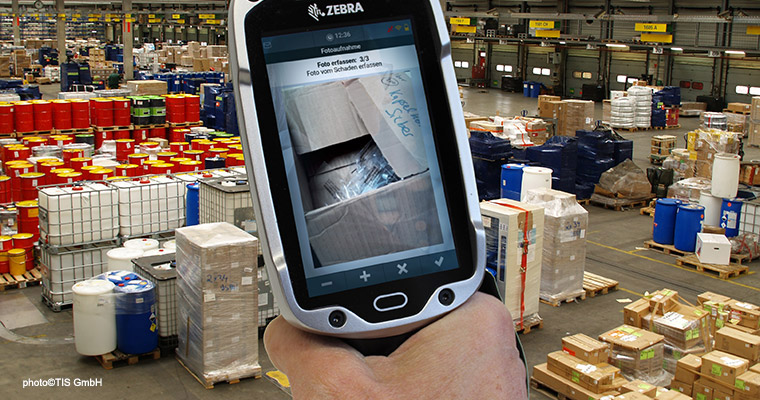 TIS GmbH, which specializes in telematics and fleet management, has developed a new Android app for damage documentation with mobile devices, which can be started directly from a terminal emulation and from there handles the shipment and package numbers concerned. This automated data capturing feature significantly accelerates claims documentation and allows the employee to complete the process in seconds. The app runs on all Android handhelds and has been optimized for the Zebra TC8000 mobile touchscreen computer. TIS offers the solution as part of the TISLOG Intra product range.

The special feature of the new development is its compatibility with so-called terminal emulations, which are widely used in storage and transshipment environments. Terminal emulations provide direct wireless access to centralized host systems without the need to store software and data on the handheld. The downside is that terminal emulations do not support the technical capabilities of modern inventory scanners - such as the photo feature. TIS 'Android damage documentation app has solved this problem.

Documenting damage starts at the terminal emulation level with two scans: In addition to the bar code of the damaged shipment, the employee also records the barcode for the respective status, for example "Packaging damaged", which can be individually defined by the customer. After this step, the Android app opens automatically, and has already taken over the shipment and package number from the terminal emulation. The display of the handheld now shows the next steps, which are completed by the employee within a few seconds. These include the desired photos of the damage, which are then sent with the shipment and package number as a damage report to the central logistics software TISLOG office. From there, the clerk can access the data and process the damage.

In combination with the Zebra TC8000 mobile touchcomputer, almost all process steps can be triggered via the scanner button integrated in the handle, so that the damage documentation can be comfortably closed using the index finger without reaching around the device. Additional operation on the touch screen is only necessary in rare cases.

Press material of the TIS GmbH

Logos and other material related to TIS GmbH can be found HERE.