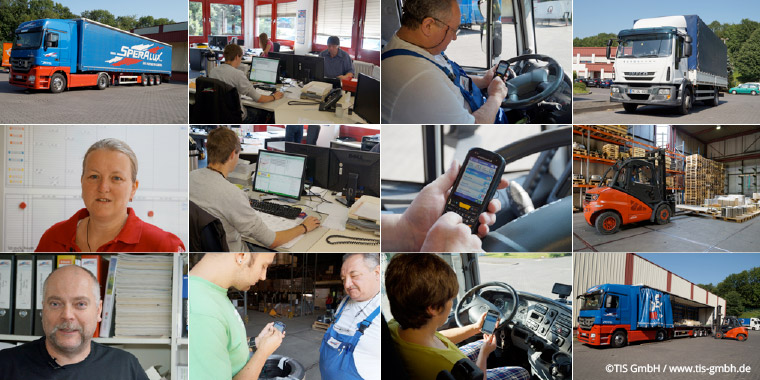 Eyeglass wearers know the drill: The own visual aid allows a clear view either in the near or far area.
But only progressive lenses cover both areas satisfactory. The situation is similar with telematics solutions for the system traffic, part load and cargo transport sector, because the requirements in system traffic, part load and cargo traffic are significantly different.

System traffic is dealing with general cargo and shipment volume. Here the focus is on signatures, delivery scanning, the capturing and documentation of Euro pallets in exchange, as well as damage documentation via scanner.

In part-load and cargo transport the current vehicle positions, driving and rest periods for drivers are still in the foreground.

This leads to different hardware requirements: While in part-load and cargo traffic often a smartphone app is sufficient for data exchange, robust industrial devices with integrated scanners are used in the system transports.

"The interface between TIS and Komalog was already existing, which significantly decreased our implementation effort," says Ingo Müller.

“For us as a partner of the Online System logistics the sophisticated menu is an essential module for quality assurance"emphasizes Quality Manager Silke Eichert.

Nevertheless, the Speralux GmbH based in Iserlohn wanted a solution from a single source for their own fleet, emphasized Ingo Müller, responsible for the areas of computing and technology at Speralux. The owner-operated forwarding agency is active as a partner of the cargo network Online System Logistics, but also operates its own fleet of 25 semitrailers and road trains. In addition, around 100 trucks in local and regional transport are scheduled daily. The nine trucks used for the handling of consignments from the cargo network Online are owned by independent contractors.

Wanted was a telematics provider who can provide a reliable, powerful yet economical overall solution for all areas.

"Apart from the actual solution we also focussed on service quality, availability and security of investments" says Silke Eichert, who is responsible for quality management at Speralux. This requirement profile corresponded to the mid-sized and owner-managed TIS GmbH in all respects. Under the name of TISLOG mobile the telematics experts from Bocholt offer various telematics solutions with specific characteristics. As a mobile telematics solution TISLOG requires no installations and can therefore be exchanged without effort between different trucks. In January 2015, the official starting signal for the introduction of TISLOG mobile at Speralux.

Speralux invested in nine mobile computers of the type Zebra MC45 with integrated scanner, which could be implemented within only two days. The tour per truck with an average of ten to twelve unloading stops is now transferred to the respective handheld along with the address data directly from the shipping software Komalog.

“The interface between TIS and Komalog was already existing, which significantly decreased our implementation effort,” says Ingo Müller.

The same applies to the training effort, “which is limited to around 30 to 60 minutes per driver," says Ingo Müller. This is mainly owed to the intuitive user interface of TISLOG mobile that allows fast learning to operate the technology.

The solution guides unmistakably through each step up to the signature of the customer on the display, the damage documentation or pallet handling.
“For us as a partner of the Online System logistics the sophisticated menu is an essential module for quality assurance“ emphasizes Quality Manager Silke Eichert.

Much easier now works the scheduling of incoming collection orders during the day. The GPS tracking capability integrated in the handheld makes the truck visible on a digital map on the screens of dispatchers.

"Without telephone inquiries are necessarily to immediately make  clear which driver the pick-up will be suited for”, explains Silke Eichert. If during pick-up on-site the number of pallets ready for pick-up turns out to be three instead of the announces two pallets, the driver can enter these changes into his handheld himself and transmit the new data to the disposition. The actual data is available then for further disposition of the goods without delay. The GPS tracking has the further effect that customer inquiries about the whereabouts of certain shipments can be answered quickly without asking the driver.

While the system transport solution TISLOG mobile PSV3 already went into real operation on Easter 2015, Speralux was able to take a little more time with their own fleet. The name of the solution optimized for the needs of the Speralux fleet is TISLOG mobile Smart.

The Speralux GmbH is a mid-sized logistics service provider based in Iserlohn. The privately held company is a member of the general cargo alliance Online System Logistics and offers its customers a wide range of services.

In addition to cargo forwarding the agency transports complete and partial loads in standard and non-standard dimensions and containers in transport streams worldwide. The Speralux forwarding agency has its own storage space and a fleet of 25 semitrailers and road trains. In addition, around 100 trucks are predisposed daily in local and regional transport.

It transforms any mobile phone with browser into a driver-related telematics terminal using an innovative website. The system receives the job data online via a tour associated website. The driver accesses a Web address on the phone in a browser and processes the jobs displayed there.
In addition, new orders can always be sent directly from the shipping software Komalog to drivers.

After delivery, the new shipment statuses, photos or proofs of delivery are transmitted securely to the central security server of TIS via data upload.

Thus at all times TISLOG mobile Smart ensures the protection of sensitive order and customer data, which are not stored on the driver's mobile phone at any time. Since August all 25 own trucks are gradually equipped with the smartphone app.

The fleet solution is complemented by truck telematics boxes of type TISLOG telematicbox Truck Premium. They provide comprehensive telematics data for scheduling and vehicle fleet management on demand. The robust hardware is equipped with a powerful GPS receiver and a separate SIM card. At Speralux the box is connected via FMS interface to the CAN bus of the truck and to the digital tachograph.

"This supplies our dispatchers reliably with data of the current driving, working and rest periods already since May,” says Ingo Müller. The processing and analysis of tachograph data is performed permanently via the portal TISLOG office. Here also data from the scanners, which are transmitted from there automatically to the shipping software Komalog, are incorporated.

Conclusion: Speralux was able to introduce the new telematics solution in operation smoothly in several steps and now has an efficient solution for a clear vision in the disposition.

The Speralux GmbH is a mid-sized logistics service provider based in Iserlohn. The privately owned company is a member of the general cargo alliance Online System logistics and offers a wide range of services to customers. In addition to part load the forwarding agency handles complete and partial loads in standard and non-standard dimensions and containers covering transport streams worldwide. Speralux GmbH has its own storage space and a fleet of 25 semitrailers and road trains. In addition, around 100 trucks are scheduled in local and regional transport daily.