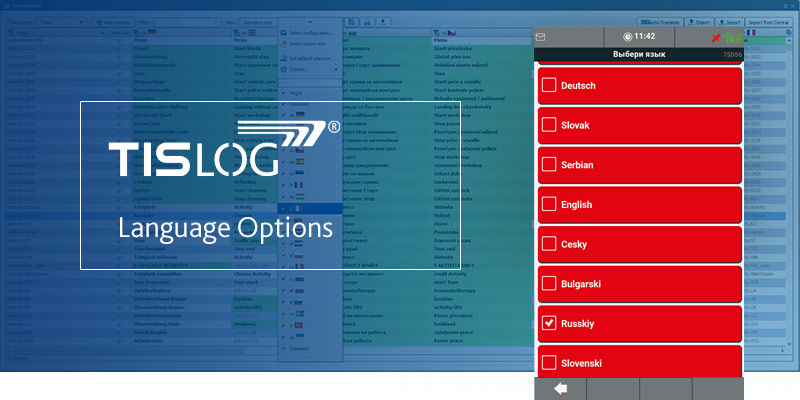 There is now good news for companies with foreign-language employees, for whom it would be easier to handle and would avoid misunderstandings if they could process orders in their own language. Since early 2020, TISLOG logistics software is offering greatly expanded foreign language options.

So far, the standard languages ​​German and English could be used. Text modules were also available in several other languages.

For the immediate output of user interfaces and written communication in over 100 languages, the two AI language services Deepl and Google Translator have now been connected via an interface. The two tools are among the most powerful automatic translators currently available, and their intelligent learning algorithms ensure that translations are as native and grammatically correct as possible.

Deepl is used for the languages ​​English, French, Spanish, Italian, Dutch, Polish, Portuguese, Russian, Japanese and Chinese (Mandarin), translations into over 100 other languages ​​are offered by Google Translate: https://translate.google.com/intl/de/about/languages/).

Thanks to the integration of automatic translations, all TISLOG customers can now choose from well over 100 languages ​​for their drivers' mobile devices.

Drivers can set the language themselves. The user interface of the TISLOG app and status texts are then displayed in the selected language. The driver's language setting also affects the driver mail system. For example, if the dispatcher writes an email in German, it is automatically translated and displayed in the "driver language". The same applies of course to the opposite direction. 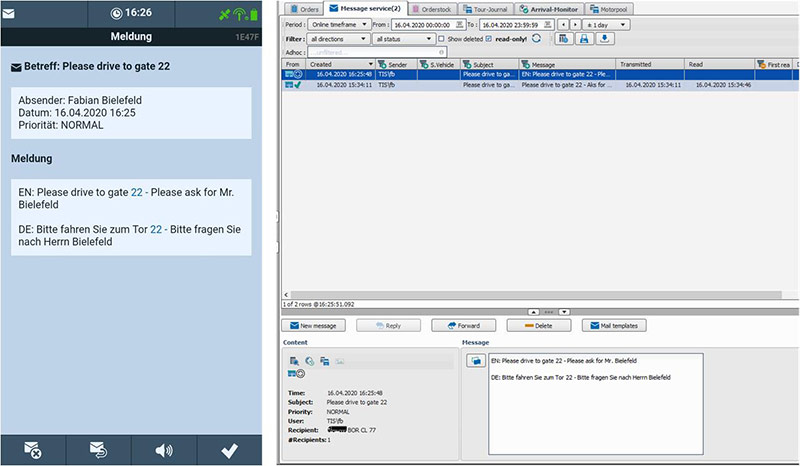 Fig.: Communication in different languages in the driver email function

Signature dialog in the language of the signee

A practical function for deliveries to foreign-language recipients is the adjustability of the signature dialog to the language of the receipt giver. If you turn the screen in signature mode, this setting changes the language for signees, e.g. from the driver's language into their own.

Language settings in the headquarters

In TISLOG office, the automated translation can be started very easily with just one click and the "preferred language" can be saved for each driver in the resource manager. After registering in the app, the driver is then automatically offered "his language". After confirmation, the app changes to the respective language. If the driver selects a different language, this is automatically updated in the resource manager. The language setting remains saved in the driver app, so the driver only has to confirm once.

In addition to the translation available in real time thanks to the integrated tools, TISLOG office also offers the option of manually entering translations during operation simply by clicking on text modules. Already completed translations are color-coded and thus easy to recognize. If a complete translation file of the corresponding language is available, it can also be added via file import.

The new expanded language functionality is available free of charge for TIS customers. If you have any questions or suggestions, please do not hesitate to contact our sales team. 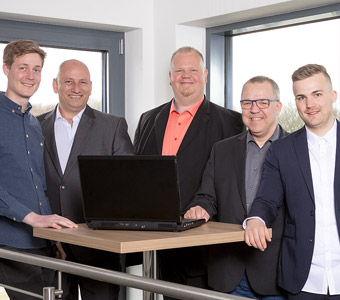 With statistics in TISLOG office Infodesk you can get a comprehensive overview of numbers and correlations to optimize your logistics processes. Find out more here.

In this issue: Industrial browser in the TISLOG logistics software, hardware and accessories, mobility package in the telematics magazine and more.

The TISLOG mobile industrial browser supports you in designing the virtual work environment for your employees. It can be used both for access to third-party systems, for example for load scanning, and to browse specified websites. Find out more here …

TIS GmbH supports TISLOG customers with the integration of the Corona warning app on their drivers’ mobile devices. Learn more in this article.

In this newsletter: Geofencing in logistics and the advantages, employee presentation, narrowband IoT in the telematics blog and new webinars from TIS

TIS integrated geofencing in the TISLOG logistics software in 2015 and continuously expanded it further.
Today, we will show you a few examples of how you can use geofencing to automate and optimize your logistical processes.