With TISLOG nothing is lost in relay trucking

TISLOG mobile Relay Trucking is a module for the TISLOG logistics software. The add-on ensures an error-free and seamless flow of information when swapping trailers or loads. The data is then available in the Infodesk web portal for communication with branches and customers as well as for ongoing ETA determination, if necessary also in connected third-party systems.

Relay trucking is a type of transport that offers several advantages for companies with depots in different cities and for their drivers. How it works: Two drivers with a load meet at an agreed point between the two depots to swap their trailers and the accompanying load documents there. Then both turn around and drive back in the direction from which they came. This way, each driver can return home on the same day.

But also beyond this transport variant, load swaps are quite common in logistics.

Load repower: Load swap because of a road breakdown

If a breakdown renders a truck unable to continue its tour and the delivery is in danger of being late, another driver usually drives to the broken-down trailer and takes over the loaded trailer following the same principle in order to sure that the delivery can take place on time.

With this transport concept, the passage of goods through a depot is occasionally waived on the last mile.
Instead, individual shipments are reloaded directly from a large 40T truck to smaller vehicles (e.g. Sprinter).

A sensitive point in all of these swap concepts are the cargo-related documents and information. These must of course also be exchanged and the tour must be assigned to the new truck so that the entire route of the load remains seamlessly traceable.

In the fast-paced logistics carousel, handling such an exchange via dispatchers and the telephone is not only cumbersome, but also prone to errors. This has direct effects on the delivery process. Any gaps in the dataflow particularly endanger the forecast of the ETA (estimated time of arrival). Thus providing information to the recipient becomes more difficult. In addition, further problems can arise if loading and unloading are on a tight schedule and by appointment only in large depots, for example.

Complete overview along the transport chain with TISLOG

The TISLOG logistics software closes the data gap reliably and offers a 100% digital solution with the feature "Relay Trucking". It automatically assigns the correct truck to the respective load and thus ensures the seamless flow of information for the uninterrupted ETA determination.

The solution has been tried and tested in practice and is currently used up to 50 times a day on around 3000 mobile devices in 3 countries.

The data exchange is very easy and flexible

1. The driver starts the exchange process in the TISLOG software

When the drivers meet at the agreed point and swap their trailers or shipments, the transferring driver selects the tour or shipments in the mobile TISLOG app and transfers them to the other driver's device via NFC or QR scanning. The accepting driver informs the TISLOG software on his own mobile device that he would like to accept the order.

Both devices are then held together to exchange the data via NFC. This also works over a distance of approx. 1.5 m, so that the drivers do not have to come closer to each other, which is also helpful during the Corona pandemic to avoid the risk of infection.

A short signal tone indicates when the devices "understand" each other and are exchanging data. The receiving device then signals that it has received a new tour with shipment data.

If two loaded trailers have been exchanged, the process needs to be performed for the second load as well between the two devices. Then the exchange is complete.

Since data is transferred via NFC (short-range communication), the data is also protected against unauthorized access during the exchange. 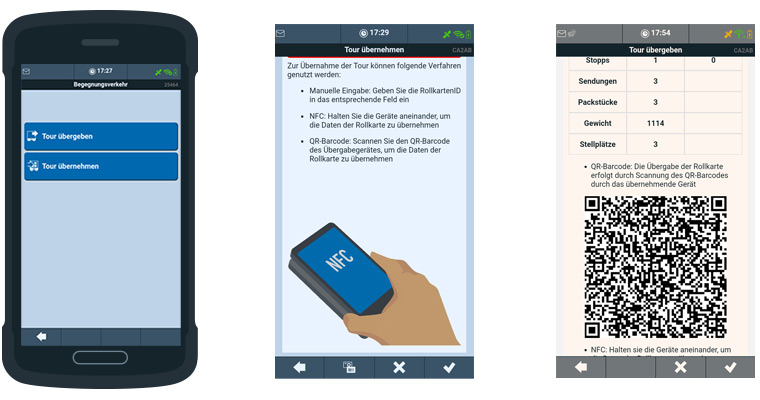 If a mobile device is not equipped with NFC, the exchange can alternatively be made by scanning a QR code on the smartphone display, which is even possible from a distance greater than 1.5m.

3. Data is immediately available on the driver devices and centrally

In the headquarters, the complete status history of the tour or tours concerned is then visible for the dispatcher in the TISLOG office web portal (Infodesk). The route of the cargo can be traced without any gaps. It is displayed which device or vehicle has placed the order at which location and at what time and which vehicle has taken over. With the help of the status generated by this action, the information in connected systems can also be updated so that, for example, the ETA determination keeps functioning continuously.

The advantages of TISLOG mobile Relay Trucking at a glance

TISLOG mobile Relay Trucking is a fast, safe and flexible procedure for transferring load data directly from driver to driver when swapping trailers or reloading shipments from vehicle to vehicle without the need for a dispatcher to intervene. Both devices communicate directly with each other via short-range data transmission, which means that the process is safe from unauthorized access and all data is transmitted to the correct device without errors.

TISLOG mobile Relay Trucking runs both in the driver app and in the browser-based version of our mobile software (TISLOG mobile Smart) and is therefore also suitable for use by your subcontractors in charter traffic.

Do you have any questions about the use of our module for relay trucking or are you interested in integrating the function in your TISLOG software?

Are you not yet a TISLOG user, but are interested in information about our logistics software?

Then contact us. We would be happy to advise you.

TISLOG, the logistics software for your order management on the road and in the warehouse, integrates all logistical processes, from order processing over seamless tracking of goods to comprehensive fleet management. The modular product range offers components for the mobile terminals of your drivers and your head office. The system can be individually adapted to your IT infrastructure and your logistical requirements and also enables the integration of temporary charter contractors. The system can be connected to existing TMS via interfaces and data from TISLOG can be used.

In this newsletter: TISLOG software module for relay trucking for direct data exchange during trailer swaps, our employee Oliver Hagenbeck-Hübert and new webinars

TISLOG mobile Relay Trucking ensures an error-free and seamless flow of information when exchanging trailers or loads. The data is then available in the Infodesk web portal for communication with branches and customers as well as for ongoing ETA determination, if necessary also in connected third-party systems.

Will you be there? We look forward to welcoming you to our stand at the International Supply Chain Conference.

Automate the updates of your mobile devices with TISLOG MDM. Also in this issue: our current webinar dates.

The mobile device management from TIS relieves you at all nodes. Our tool takes over control and automatic execution of the updates and thus integrates the maintenance work seamlessly into your logistics processes.

Will we see you at the Verkehrsrundschau conference in Dortmund in September? We will be there with a lecture. Find more information about the event and our current webinar dates in this issue.

Newsletter: TISLOG driver mail for facilitated communication with your drivers. Also: Our current webinars free for you. Learn more …

The “Driver Mail” module is available in our TISLOG logistics software for fast and direct communication. The tool not only reduces phone calls and enables you to take and send photos directly with the message to the drivers. Thanks to the numerous configuration options in TISLOG, the module can also be precisely adapted to your needs.