TISLOG telematics software in practice, reinforcement for our administration

Summertime is finally here - with hot sunny days and heat thunderstorms. And because the holiday season has started we will contact you today only briefly with interesting news from the TIS-world. Read about our customer Spedition Ansorge and why they have opted again for TIS - this time for the TISLOG software. And meet our new employee: Stefan Hebing.

The topics of this issue

Our client Spedition Ansorge makes the switch to TISLOG

Our client Spedition Ansorge makes the switch to TISLOG

Since 2009, Spedition Ansorge worked with our proven PSV3 solution for long distance service. Now a technical modernization was due - and again, the forwarder decided to work with us - around 200 vehicle units are now equipped with the TISLOG logistics software with significantly enhanced features.

“In addition to pure data transmission a telematics system is expected to lead the driver through its well structured work processes. TIS could best integrate our individual processes in intermodal transport of swap trailers, "explains Christian Winkler, authorized signatory and commercial director of Spedition Ansorge. The special features at Ansorge include, for example, the stop of the interchangeable container at stations, the registration and display of container numbers to the driver.

In the future, our telematicboxes Truck PREMIUM will be used in conjunction with robust "Tab Active" Tablets from Samsung with SIM cards from TIS instead of the former mobile board computers from Psion Teklogix. "The handling of the devices is considerably simplified and accelerated by the touch screen solution," says Winkler.

The hardware will be permanently installed in the tractor, for this purpose TIS has developed special holders for tablets with integrated charging technology to provide increased battery life.

"The significant further development of the telematics system lies in a completely new architecture. The intelligence of the solution no longer sitting in the terminal, but in the telematicbox Truck" Winkler explains the innovation. In the past sometimes data loss occurred due to defective devices and gaps in the mobile network. In the new solution, the data is stored in the TISPLUS telematicbox Truck and also still available at a later time. The introduction of the new telematics solution is planned to be completed in the summer of 2016.

Want to know more about our TISLOG software?
We will be happy to advise you. 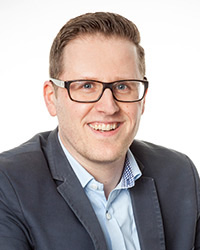 Since March a new employee is working in our administration. Stefan Hebing completed a training as an industrial clerk and successfully studied to become a state certified business economist in the field of Business Administration with a specialization in sales management / marketing. First Stefan Hebing worked in the production planning of a manufacturer of women's outerwear. He has overseen international production and scheduled and organized orders and return shipments of goods. He then spent eight years in supply chain management at a service provider in the after-sales service. He has managed projects and implemented processes of various international customers.

With us he will be able to use this experience in diverse areas of responsibility and support our team from sales about marketing, purchasing and accounting.

He spends his spare time with his family and children and is following up 20 years of active football time at least on the screen, to be up-to-date on the current events in this sport.

About TIS he says: "I like TIS like very much! The administration has an interesting and broad range of tasks, TIS is a company that is aware of the value, the employees bring to the company.
And TIS a family owned and operated business and that shows. "

See you again in August!

That was it with news for July. See you in August!
For comments, requests or suggestions about this Newsletter we are gladly available.

All news of TIS GmbH Bocholt for November 2022: Automations in TISLOG and Honeywell EDA52 at special price.

To make the working day easier for the truck drivers, the TISLOG system offers different automations. Get more information now.

We offer you Honeywell EDA52 to a special prize: you saving: 10% from the current price. Only while stock last. Get more information!

All news about TIS GmbH in October 2022: Last telematics webinars of the year, TISLOG Autodispo and TISLOG office Infodesk 5.0.

The TISLOG Autodispo standardizes the operating schedules and increases the efficiency of employees and fleet in forwarding agents.

TISLOG office Infodesk 5.0 is the new web frontend os TISLOG and comes with different advantages and a modern design.

All news about TIS GmbH: InnoMATIK 2022, TISLOG telephone app, Challenges of a navigation and Webinars

In the course of our TISLOG logistics software we developed an own telephone app which brings different advantages over normal telephone applications which are pre-installed on the mobile phone.